This week was a poor one in general for Spurs, despite advancing to the fourth round of the FA cup.

After a shocking performance against Chelsea leaving us all but out of the Carabao Cup, Spurs made hard work of a match against lesser opposition in the FA cup.

On the back of a poor week for the fringe players, the winners will be a lot harder to write, and I will struggle to narrow down the losers.

This man continues to be one of the key beneficiaries of Conte’s arrival. Despite not having the greatest performance midweek against Chelsea, Lucas spared Tottenham’s blushes in the FA cup against Morecambe.

A former fringe player, Lucas came on as part of the rescue squad against Morecambe and showed great composure to put Tottenham ahead towards the end of the match.

For similar reasons to Lucas, Harry Kane finds himself on the winners’ list this week.

Although it was hard to pick a bright spark from the Chelsea game, Kane did show commitment and determination, despite not being at his best.

And on Sunday, he reminded Spurs of his everlasting importance as he came on and grabbed a goal to help rescue Tottenham’s second-string players.

Unfortunately, this week will only feature two winners, as reflects the performances of Tottenham this week.

Another chance for Winks to impress and another chance taken. He was the best player on the pitch across the 90 minutes against Morecambe, not to mention that superb goal. Always looks to create from deep and you sense that Conte really likes him.

This is a curious one. I am not quite sure what has happened to this man.

A player with great potential, he started the season very positively with a man of the match performance against Manchester City.

However, as the season has gone on he has seemed to lose his way a little bit.

Of all three goals conceded this week, Japhet was at fault for all three. A poor pass against Chelsea allowed Alonso to latch on and slip Kai Havertz in, and the second was just like something out of a comedy sketch.

Against Morecambe Tanganga lost his man from the corner, allowing for a shock lead for the visitors.

This is a player who I still believe in greatly. Perhaps a loan move would be the best solution for him at the moment.

This is an even more curious case. Only a few years ago this young man had the world at his feet, and now he is struggling to make an impact against lower league opposition.

It seems as if he is in his comfort zone and struggling to find that hunger. A move away and a fresh start might be vital for Dele to rediscover his potential.

Perhaps the biggest loser of the week, have we seen this man play his last match for Tottenham Hotspur?

Whilst being substituted against Morecambe after an underwhelming performance, Tanguy took his time and was booed off, heading straight down the tunnel, even being screamed at by Harry Kane on his way.

It was shocking from the player and it seemed in that moment as if he couldn’t care less about Tottenham Hotspur.

Pound for pound this may be one of Tottenham’s worst ever signings, and it is a great shame as this is a player with huge potential. He just doesn’t have the right attitude to match.

Hopefully, we can make an unlikely comeback against Chelsea tomorrow evening. 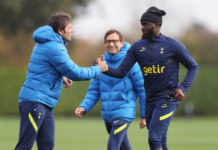 Report: Club make it clear £20m-rated Spurs target is not for sale in January