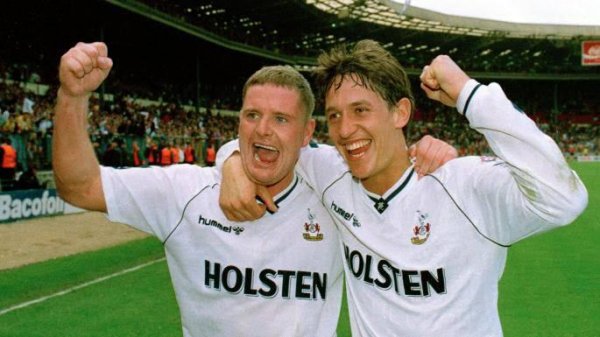 Note: Whilst this kit was mostly used in the 90s, it was first introduced in 1989, which makes it eligible to feature on this list.

Mention the year 1991 to any Tottenham supporter and one thing springs to mind – FA Cup glory.

From 1989 up until the final of the 1991 FA Cup, Tottenham wore Hummel’s fourth rendition of kits. The kit holds strong sentimental value to most Spurs fans because of their success throughout the FA Cup competition that season.

Unforgettably, it was the kit that saw the club defeat Arsenal 3-1 in the FA Cup semi-final that earned them a spot in the final against Nottingham Forest.

Despite the fact they didn’t wear the same kit in the final, where they instead opted for the new 1991/92 kit, it was still fantastic in all facets.

On the centre of the collar was a classy edition of the Tottenham logo with a blue trim leading down to it.

The kit witnessed the Club enjoy a very successful season in 1989/90, finishing third overall behind Aston Villa and Liverpool. The following season with the same kit the club finished 10th, a decline from the previous season, but qualified for the 1991/92 European Cup Winners’ Cup qualifying round.

This was the final kit manufactured by Hummel before the Club switched to Umbro.

Opinion: Is Max Aarons the answer to the Spurs right-back problem?

Report: Defender tells Serie A outfit he wants to leave amid Spurs speculation

Opinion: Is Max Aarons the answer to the Spurs right-back problem?